So the premier episode of Project Runway  Season 11, complete with Zac Pozen, has concluded and I am going to recap the shit out of it!  A bit late, but the flu has attacked my wit and wisdom and I am now feeling well enough to hash the goods without upchucking the goods.


After watching a couple of times I realized that I had a tendency to come off a bit snarky, and my sideways glances had a bit of the devil in them, when in all actuality could have been just nerves or gas bubbles caused by nerves.  It’s the first challenge for god’s sake!


I said things like: “I don’t think I am going to help Emily.” Well, I did, as did Cindy and Samantha.  Frantically with what time was left.  I also helped Ben, as did Matt and Samantha, get his dress together.  It was a team of helping. And for the most part we really got along.


I also said that I had seen Daniel’s garment like 30 years ago.  I wasn’t the only one.  Zac Posen mentioned he had just seen it on the Paris runway.  So yea, when I was 4 I saw it in the future.  Because I am psychic.


As for the team names… they were weak.  However, there was little time… like a breath to come up with them.  In hindsight the Dream Team should have been “Born of Satin’s Breath” or “Sissors of the Underworld” or something really metal and terrifying.


Let’s chat dress shall we?


My first dress was inspired by the rebuilding of the World trade center, the scaffolding in particular.  I purchased some pretty industrial fabric, waxed denim and wool Melton (one of my favorite fabrics of all time), and a plethora of notions to make side bag/harness piece to recreate the scaffolding. 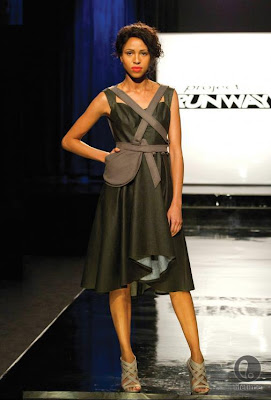 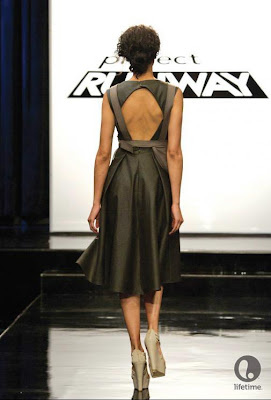 Here is what the blogs said:
“Overdone. Desperately in need of editing.” – Tom and Lorenzo http://www.tomandlorenzo.com/2013/01/pr-s11e1-neverending-story.html


Over at Rate the Runway on Lifetime:
http://www.mylifetime.com/shows/project-runway/season-11/rate-the-runway/episode-1#disqus_thread
I received a vote of 2.49 out of 5 by 2244 viewers.  Here is what a few of them said:


“I may be flying solo here, but this was my favorite look of the night. Urban Commando. The fabric, proportion, para-military element and surprise backless feature all worked.”
“Just when Mayor Bloomberg announced the lowest murder rate in NY for many years, along comes a terrorist….”


“Is she going camping?”


“The dress gorgeous, however, the purse contraption, while clever as hell, belonged on a much simpler dress. The purse contraption is very New York, if you think about how practical New Yorkers must be. Over a sheath dress or pants, this would have been inspired street chic. The fact that this was a good design on the team that failed meant that she didn't get the criticism she needed to improve in the next challenge.”


And then there is The Democracy Diva’s thoughts:
http://democracydiva.com/2013/01/26/project-runway-recap-season-11-premiere/


“The back is pretty, but I can’t like a dress with a built-in fanny pack. I just can’t do it.”


Overall, pretty funny. I wouldn’t do a damn thing differently.  I have learned that black doesn’t show very well on the runway, all the minute details were lost.  But I still think it is a kick ass dress.  And I think my model, Miss Brandi rocked it!
Oh and those who know me know that my idea of camping is called a hotel.

bags, fags, & drags
Bags, Fags & Drags is my way of blogging about the ups, downs and cuts of my fashion follies. Born and raised in Portland, Oregon in the late 1970’s, I started in fashion while a teenager. With a limited budget I would dive through discount, vintage bins, only to alter them to make them fit better and make a statement. Clothing creates a memory. I can tell you what I wore on every first day of school, formal dance and job interview. I love to dress. And I love to dress people. One day, I will dress the world.______________________________________________A bit about my line: “Au clothing, formerly m i c h e l l e i s w e l l, is designed and produced by Portland native Michelle Lesniak Franklin. Au is the symbol for gold on the periodic table of the elements, which signifies strength, warmth, optimism, balance and intelligence.”